On Thursday the 13th of August a frequent summer visitor to the island, Caitlin Rother, will be talking about her true crime non-fiction works, and her novel Naked Addiction. You can get a flavor of Caitln’s writing in this video from the San Diego Writing Women Launch Party 2/19/2011 where she reads from Dead Reckoning.

Caitlin describes some of her true crime books in her biography:

“I spent five years researching and writing DEAD RECKONING, the story behind the murder of Tom and Jackie Hawks by Skylar Deleon and his wife Jennifer, the Bonnie and Clyde of the OC.”

“In 2010 I co-authored MY LIFE, DELETED, a fascinating memoir about Scott Bolzan, which combines a medical mystery with a love story and a tale of resillience and determination.”

“Then came LOST GIRLS, a controversial book that delves into many new and exclusive areas of the high profile case of rape and murder of San Diego area teenagers Chelsea King and Amber Dubois by sexual predator John Gardner.”

“My latest release (January 2014) is I’LL TAKE CARE OF YOU, the story behind a fascinating cold case out of Newport Beach, Calif.: the love triangle murder of multimillionaire entrepreneur Bill McLaughlin by his femme fatale fiancee, Nanette Johnston Packard, and her NFL-linebacker lover, Eric Naposki.”

The sharp eyed amongst you may recognize Caitlin from her recent performance at the Tree House. 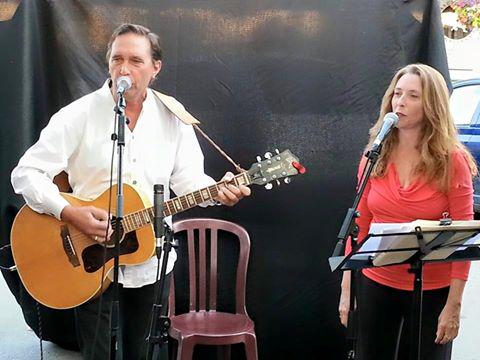 Caitlin singing with Geza at the Tree House Cafe.

Come hear her talk on Thursday at 4pm in the Program Room.