Cahill’s Kolea, Story of Hawaii and Beyond, tells the story of the illegitimate child of Maui’s King, who is spirited away and raised in seclusion by a mysterious Hula Dancer and a blind warrior. As a child, Kolea is trained by the warrior and pursued by an evil half-brother to Molokai. A daring escape in a voyaging canoe leads north to the Pacific Northwest as the Hawaiian men and women warriors join Tlingit Indians and Kolea grows in wisdom and courage. Cahill, author of Tales from the Parks: My Adventures as a Park Ranger is a retired and lives near Olympia, WA. He is of Native Hawaiian ancestry and writes about the people of Hawaii and Western North America. He was born in San Francisco and attended San Jose State College, with a degree in Biology. He has served in Yosemite, Glacier Bay, Katmai and Haleakala National Parks and has been the Director of the Alaska and California State Parks and the Deputy Director of Washington’s State Parks.

Peggy Herring’s historical fiction novel Anna, Like Thunder, is based on a shipwreck off the Olympic Peninsula in 1808. There were 22 Russians on board, and they lived with the Hoh, Makahs, and Quileutes until they were rescued eighteen months later. The book looks at the early days of contact between Indigenous peoples and Europeans on this coast and recorded history. Herring is the author of the novel This Innocent Corner, and her short stories and essays are published in magazines and literary journals. She’s worked as a producer and journalist for CBC Radio, and lived in India, Bangladesh, Nepal, England, and Japan, and now resides in Victoria. 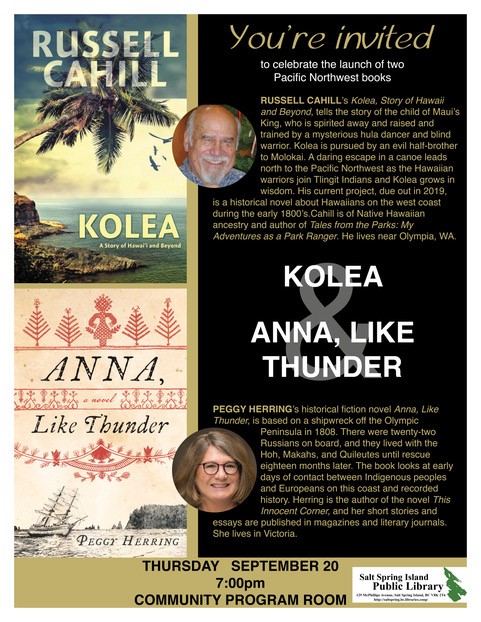