The Salt Spring Island Public Library is creating an Indigenous Mural with support from its community partners: Stqeeye’ Learning Society (Xwaaqw’um Project); Salt Spring Arts Council; Gulf Islands School District #64 Indigenous Education Department; Adam Olsen, MLA, as well as the C.R.D, owner of the Library building, and funding partners: The Salt Spring Island Foundation and The Philip & Muriel Berman Foundation. The Library and its partners are committed to the principles of Truth & Reconciliation and local arts projects, and are working together to create a mural by Indigenous youth representatives of First Nations in the Southern Gulf Islands region.

The mural is being produced by Quw’utsun Artist Charlene Johnny, who is mentoring young artists of local Indigenous communities to create the mural on the outside of the Library building. The objective of the mural by Indigenous youth is to raise awareness of local Indigenous communities on Salt Spring, to mentor Indigenous artists, and to be a symbol of the Library and community’s commitment to Truth and Reconciliation. The project includes artistic contributions from Quw’utsun, W̱SÁNEĆ First Nations, and Penelakut peoples. With blessings from local First Nations, we hope that the design may inspire future murals on Salt Spring, kickstarting a local movement to increase public art in the village, with inclusion of Indigenous representation.

The Library opened in 2012 and, working with community partners, has co-sponsored annual Indigenous reconciliation programs. In 2018, it officially supported the recommendations presented in the Canadian Federation of Library Associations (CFLA-FCAB) Truth and Reconciliation Report and Recommendations. SSIPL has followed the recommendations as part of the 2018 Library series on the United Nations Declaration on the Rights of Indigenous Peoples (UNDRIP) by hosting speakers, including Adam Olsen, MLA for Saanich North and the Islands. The Library featured displays and art installations in the Library with First Nations Elders and families when the Library installed a permanent art exhibit honouring First Nations involvement in protecting a local burial area, Grace Islet. The Library has also hosted a continuing Reconciliation program since 2019, with Reconciliation Reading Circles led by local women of Indigenous descent.

The Salt Spring Island Public Library hopes that the mural project demonstrates a visible commitment to Reconciliation, at a time of great need for these dialogues, and creates an artistic presence of Indigenous culture in Ganges, making Salt Spring’s Indigenous presence more accessible and present to all. 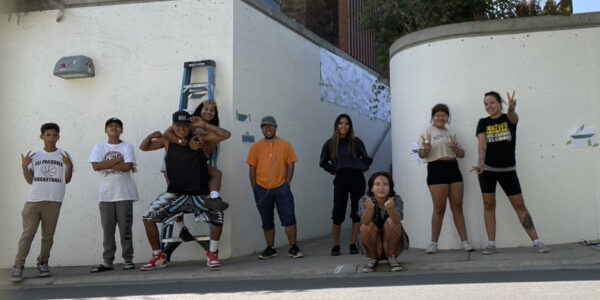 August 17 – Tracing Stencils to the Wall