History of the Library

The first lending library on Salt Spring Island was housed at Broadwell’s General Store and Post Office in 1898, where a start-up collection of about 60 books were available to borrow. The Broadwell Store was across from Central Hall (Fritz Theater), near the present-day location of Fire Hall #3.

The Salt Spring Island library (a pay-lending library, operating at minimal cost) was established in 1930 by Mrs. A.J. Smith in a storeroom at Mouat Bros. and Co.

In 1958 a group of Salt Spring women lead by Mrs. Stan (Mary) Hawkins met to discuss the formation of a public library as a “centennial project”, celebrating the formation of the colony of British Columbia in 1858.

The library was moved to a larger section of the Mouat Bros. building and in 1959 had its grand opening, with a collection of 1300 books and $7.68 in funds.

In 1960, the Salt Spring Island Public Library Association was incorporated. By 1963 over 5000 books had been collected with an annual circulation of 7000, and another upsize was necessary. 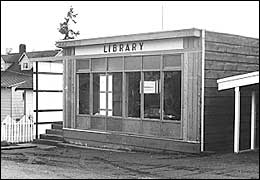 The boat building shed which became the library in its present location on McPhillips Avenue was acquired in 1963 but was enlarged and renovated several times, combining several properties. Our library was the only one in BC with a bathtub. The public library has operated at this location since 1964. Mrs. Mary Hawkins, who was the Secretary-Treasurer of the first Board, passed away in 1974. The library was later named the Mary Hawkins Memorial Library in her honour.

By 2002, talk of a new building began in earnest. Discussion over form and function were ongoing. The library was staffed by a growing number of volunteers over the years. In the early years, a volunteer staff of two, manning the “in” desk and the “out” desk, handling the day-to-day operations. A time came when more help was needed, and a “third person” was added. In October 2004, the first paid librarian was hired to work part-time with the volunteers. In 2008 a second part-time librarian was hired.

The Friends of Salt Spring Library, led by Patrick Byrne, incorporated under the BC Societies Act on June 20, 2005, raised $245,700 for the new library and paid for architectural drawings and purchase of the McColl property adjacent to the library. The society dissolved and the funds were transferred to the Library between 2006-2008. The land referendum was held in late 2007 passed by majority. The glass donor plaque in the lobby names the land campaign donors.

In September 2009, after many years of planning by the library Board and volunteers, the library received a Federal-Provincial infrastructure grant of $4.55 million to construct a new library building, conditional on 30% community funding. In December 2009, Salt Spring voters passed a referendum 78% in favour of $2.75 million for a new library.

The entire collection of books moved to a temporary location on Jackson Avenue. The old library was torn down and the library continued to operate there for a year and a half during the construction of the new facility.

The new $7.25 million Salt Spring Public Library, designed by Chang Holovsky Architects Inc., opened its doors on December 20, 2012, garnering rave reviews and awards for its design, ambience, and services. Two Librarians began working full-time and an administrative assistant was hired to assist with the management of the new building.